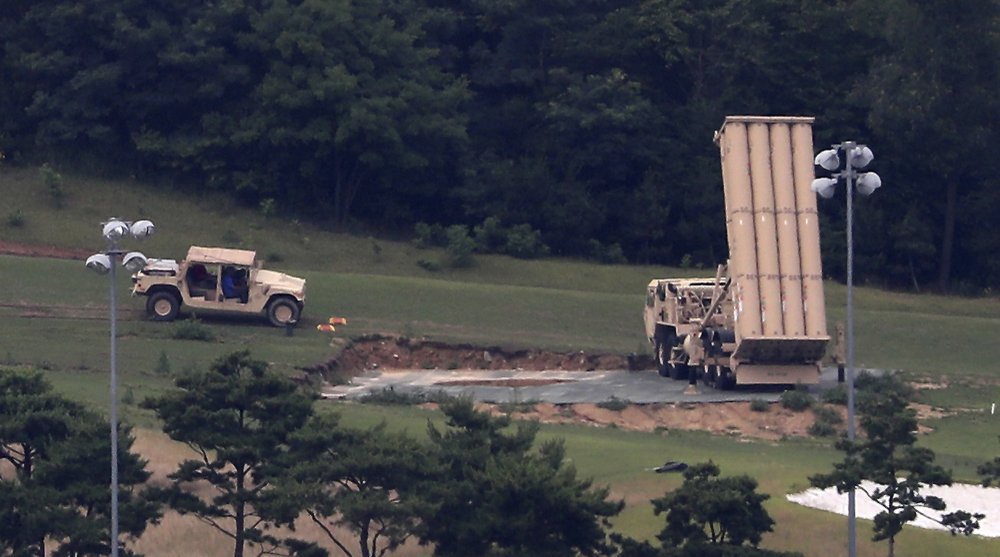 FILE – In this July 4, 2017, file photo, a U.S. highly advanced missile defense system called Terminal High Altitude Area Defense, or THAAD, is seen at a golf course in Seongju, South Korea. The U.S. has deployed THAAD in Israel for the first time, the American and Israeli militaries announced, reflecting their shared concerns about Iran’s development of powerful missiles. An Israeli army spokesman, told reporters that a THAAD battery, flown in from the U.S. and Europe, arrived Monday, March 4, 2019, at an air force base in southern Israel. (Kim Jun-beom/Yonhap via AP, File)

JERUSALEM (AP) — The U.S. has deployed a highly advanced missile defense system in Israel for the first time, the American and Israeli militaries announced Monday, reflecting their shared concerns about Iran’s development of powerful missiles.

Prime Minister Benjamin Netanyahu hailed the deployment of the Terminal High Altitude Area Defense system, or THAAD, as a testament to the strength of the two countries’ military ties, saying that it makes Israel “even stronger in order to deal with near and distant threats from throughout the Middle East.”

Lt. Col. Jonathan Conricus, an Israeli army spokesman, told reporters that a THAAD battery, flown in from the U.S. and Europe, arrived Monday at an air force base in southern Israel. He said that the defense battery has only been installed a few times elsewhere in the world, and tested the U.S. ability to carry out accelerated deployment of such powerful and complex weapons.

Israel already has an advanced multi-layered missile defense system, capable of intercepting everything from advanced guided long-range missiles outside the atmosphere to short-range unguided rockets fired from neighboring Gaza.

During this week’s drill, the THAAD battery, which shoots down long and intermediate range missiles, will bolster Israel’s existing systems. The deployment is temporary, and for now, the THAAD system will not be permanently integrated into the Israeli defense shield, Conricus said.

The U.S. military echoed said the deployment demonstrates the United States’ “continued commitment to Israel’s regional security” and more broadly shows that U.S. forces can “respond quickly and unpredictably to any threat, anywhere, at any time.”

Conricus described the deployment as a defensive drill unrelated to current developments in the region, but it comes amid tensions with Iran and its Lebanese proxy Hezbollah. Earlier this year, tensions nearly escalated into a confrontation between the longtime foes when Israel struck Iranian military targets in Syria in retaliation for Iran launching a missile from Damascus toward northern Israel. The Iranian missile was successfully intercepted by Israel’s defensive shield.

Israeli officials have repeatedly raised concerns about Iran’s development of long-range missiles as well as Hezbollah’s vast arsenal of rockets and missiles in neighboring Lebanon.

A Bible prophecy has been realised as the first ‘red heifer in 2,000 years’ was born in Israel.

The Temple Institute announced the birth on their YouTube channel and said the calf and its mother would undergo “extensive examination” to determine if it’s “blemish free”.

In the announcement, the Institute said the red female calf “brings the promise of reinstating Biblical purity to the world”.

In both Christianity and Judaism, red heifers feature in tales about the “end of times”.

The birth and sacrifice of the red cow is said to precede the construction of the Third Temple in Jerusalem.

In mainstream Orthodox Judaism, the rebuilding of the Temple will happen before the coming of the Jewish Messiah.

The two previous temples have been destroyed.

However, The Temple Institute and other organisations have been established with the goal of building the Third Temple on Mount Moriah or the Temple Mount.

But some theologians believe the construction of the Third Temple is linked to ‘Judgement Day’ or the ‘end of times’.

The video on the Institutes’s YouTube channel shows the calf with its mother and proclaims: “a perfectly red heifer was born in the land of Israel”.

The calf has since undergone “extensive examination by rabbinical experts” who confirmed she is a “viable candidate for the Biblical red heifer”.

However, the cow could be disqualified due to “natural causes”.

Bosses at the Temple Institute founded a Raise a Red Heifer in Israel program three years ago.